10 minutes walk from the Cathedral square you find the Monastery of San Nicolò l’Arena, a late baroque monument and one of the biggest Benedictine monastery in Europe. The construction of the building started in 1500 and has continued until today. It is an example of architectonical integration of different styles through different epochs:  you can find a roman house, the cloisters and a roof garden. The monastery is a UNESCO World Heritage Site. It hosts the Department of Humanities of the University of Catania. 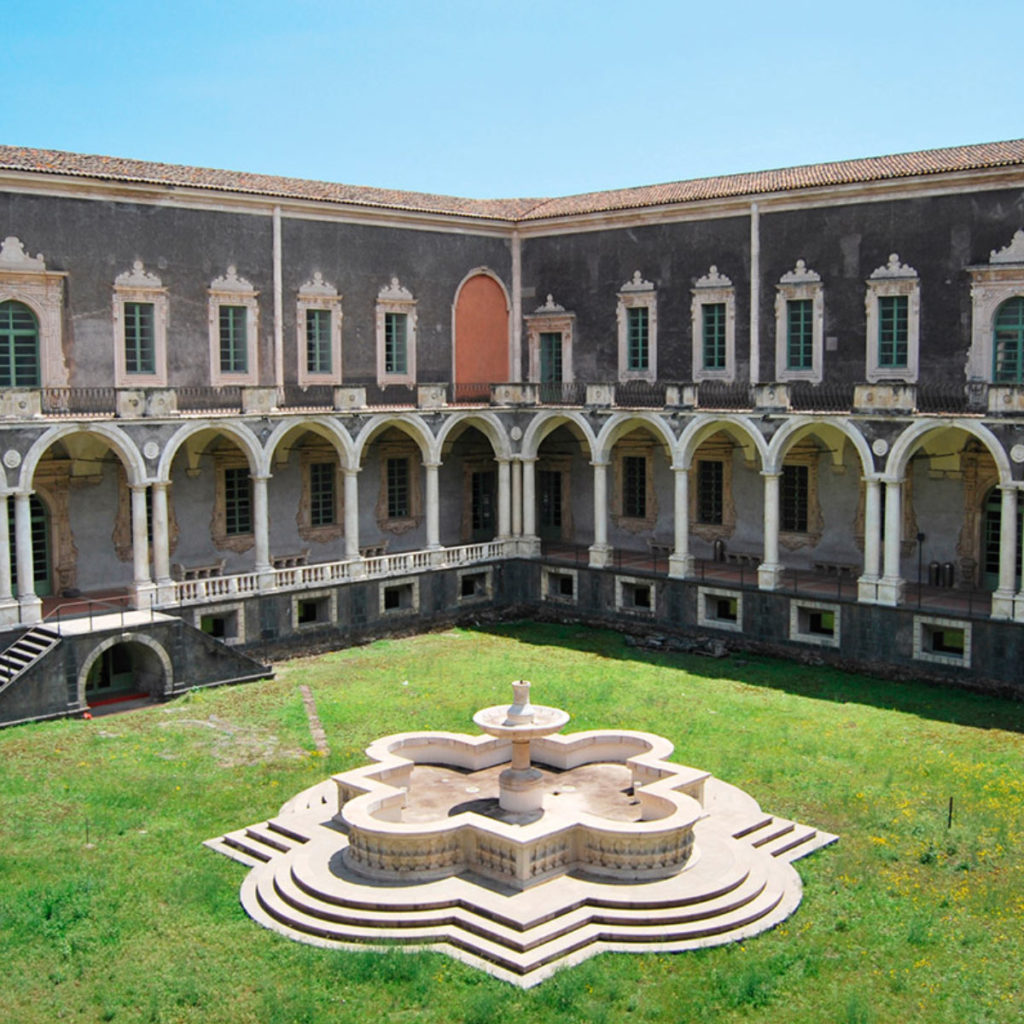 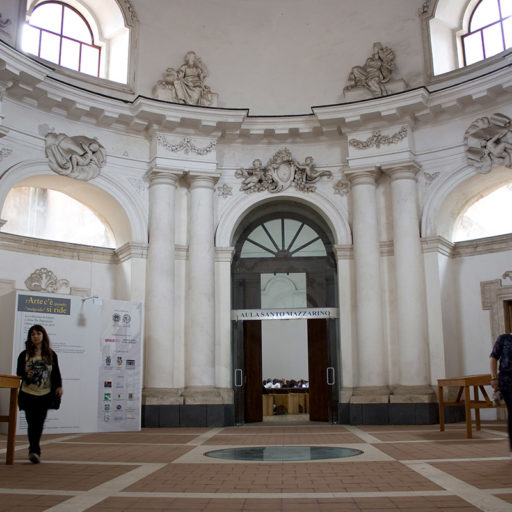 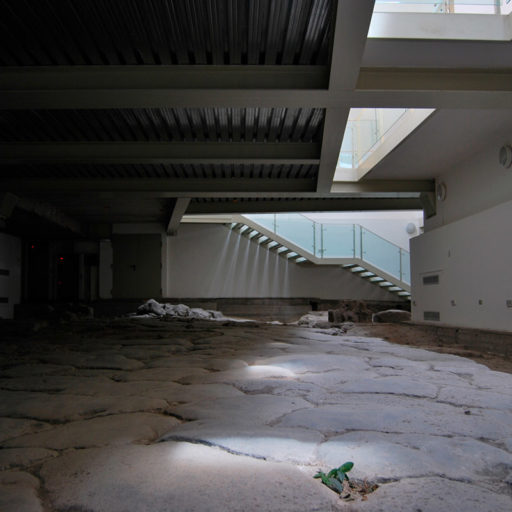 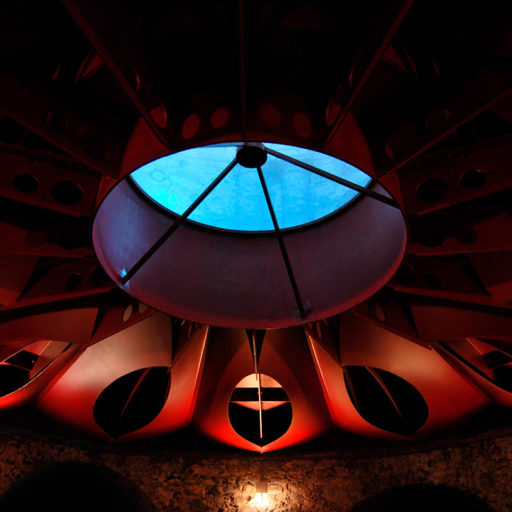 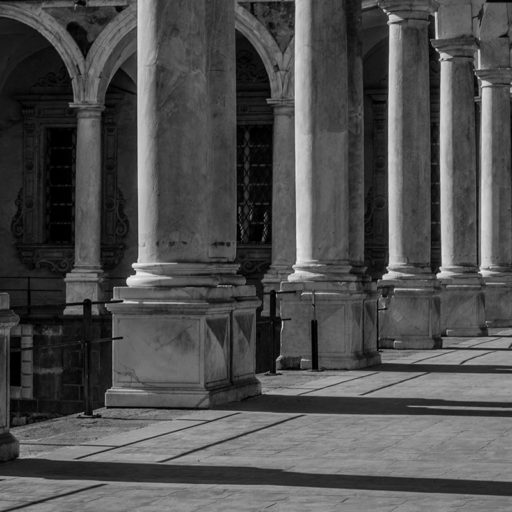 The Benedictine Monastery of Catania is a jewel of the late Sicilian Baroque. A Cassinese congregation founded the complex in 1558. The original structure was modified by two natural calamities the lava eruption of 1669 and the earthquake of 1693. It was destroyed and re-built and it is now an example of the integration of different historical periods. Visiting it, you can see the changes due to the lava eruption and the earthquake, but also to the civil uses to which it was destined after the Italian Unification.

The first Monastery had a square floor plan with a cloister in the middle, called the “marble cloister” (renamed Western cloister) because of the presence of a refined colonnade from the XVIII century and a four-leaved clover shaped fountain in the middle with elegant decorations typical of the Renaissance period both made with precious marble from Carrara.

The lava eruption of 1669 and the catastrophic earthquake of 1693 marked the destiny of Catania during the XVII century. On March 8, 1669 the Volcano Etna exploded. Lava started to flow from two deep fissures. There were high clouds of smoke, and pyroclastic materials were thrown around through explosions. The eruption of Etna showed all its power. At the end of April, the lava flow reached the city walls, and the Benedictine Monastery of the XVI Century. The city was protected by building dikes in order to deviate the course of the lava flow.

The monastery was saved, but not the Church attached to it, which was completely destroyed by the lava. The area surrounding the Benedictine Monastery changed completely. Lava stone, up to 12 meters high had destroyed the cultivated area around the monastery, leaving behind a lunar landscape. 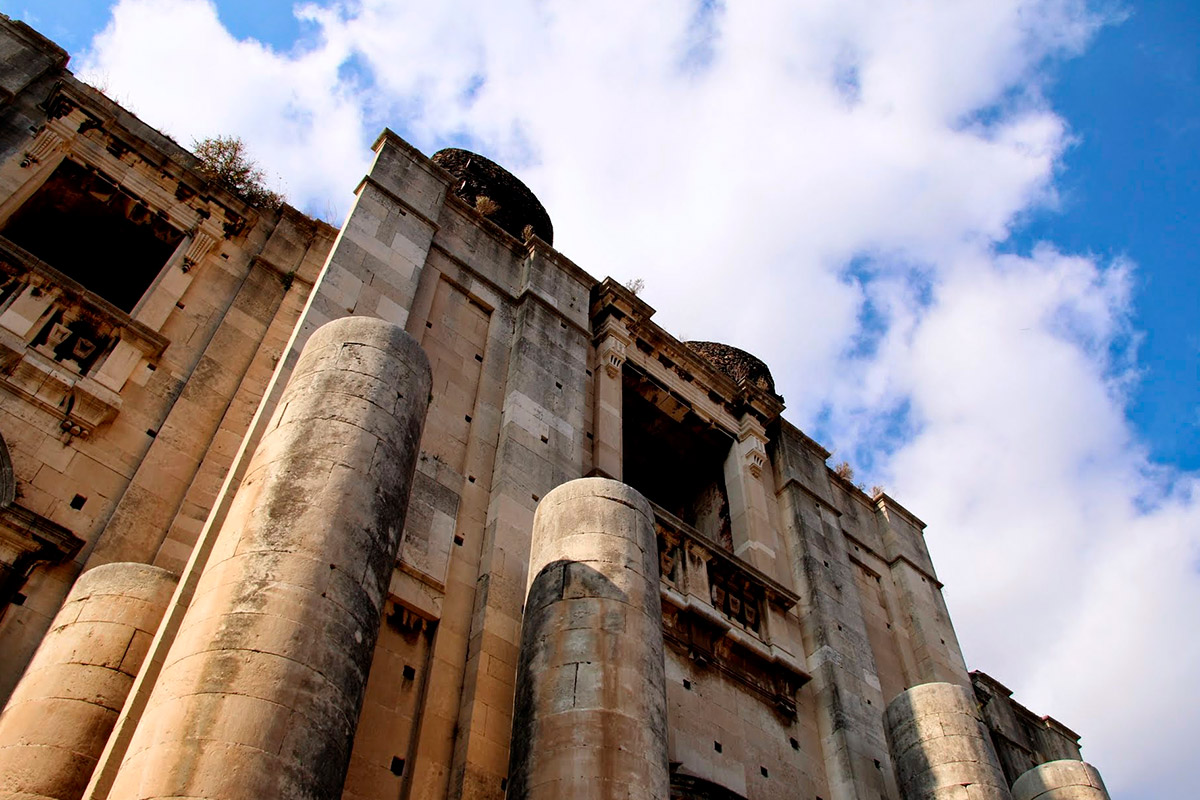 Eighteen years after the eruption, in 1687, the reconstruction of the Church started, probably based on a project of the roman architect Contini. The Monastery of the XVI century had a basement, where the kitchen and the cellars to preserve food were located, and two other floors hosting the cells of the monks, the church, the refectory, the library, the parlour and the marble cloister.

In the night between the 10th and 11th of January of 1693 the city of Catania was shacked. The earthquake of 1693 was one of the most devastating catastrophes in Eastern Sicily: the Val di Noto was razed to the ground. According to researchers, the earthquake reached a magnitude of 7,7 degrees on the Richter scale. The day after the earthquake, the city was destroyed and most of the citizens were buried under the ruins.

The basement and part of the first floor of the Monastery of the XVI century, were still safe. Only 14 columns of the cloister were still standing, the others were destroyed.

In 1702, nine years after the earthquake, the reconstruction of the monastery started. Monks coming from other monastery moved here. The monastery grew compared to the original plan. Next to the ‘Marble’ or Western cloister, rebuilt and renewed with late-baroque decorations, the Eastern Cloister with its garden and the Caffeaos in eclectic style was added. A new area on the North side was also added to host the rooms destined to the common activities of the monks: the library, the kitchen, the novices’ aisle, the dining rooms, the night choir (chapel). On top of the lava ‘wall’, were built two gardens: the botanical garden – the wonders garden – and the novices’ garden. The church of San Nicolò l’Arena was conceived as a small Sicilian Saint Peter, but its facade remained unfinished. 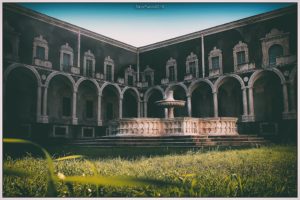 Extended and enriched with decorations, the monastery became one of the biggest in Europe, following the other Benedictine Monastery of Mafra in Portugal.

Various famous Sicilian architects took part in the reconstruction: Ittar, Battaglia, Battaglia Santangelo, and Palazzotto. Craftsmen came from various Sicilian towns: Palermo, Messina, Siracusa. Giovan Battista Vaccarini is one of the most important architects who participated in the reconstruction. He designed the kitchen, the main dining-hall and the library (nowadays the Biblioteche Riunite Civica e Ursino Recupero). The architect, originating from Palermo, had studied in Roma where he had met famous architects of the time, like Fontana, Michetti, De Sanctis. His reference and inspiration figures were Bernini and Borromini. He had passionately studied them and they often inspired his work.

In 1866, the state confiscated the Benedictine Monastery, which passed under the property of the state. From 1868, the monastery was re-used for civil scopes. There were mostly schools, among which the Istituto Regio Carlo Gemmellaro, but also a barrack (in the South wing and in the court) and the Astrophysics laboratory with the laboratory of meteorology and geodynamics (in the kitchen and cellars, nowadays Museo della Fabbrica). These new uses caused a deep and, sometimes, irreversible change of the monastery structure, despite it had been recognised as National monument immediately after the Italian Unification. Most of the frescos were cancelled, the corridors were divided, and other divisions added to create offices, training rooms, and toilets. The new hospital named after the Italian king, Vittorio Emanuele, was built in the botanical garden spaces. The Church of San Nicolò is used by the municipality of Catania as a place of worship. The sacristy, also built by Vaccarini, will host the memorial of the two World Wars Soldiers. Only the library remained in its original state. The monks’ collection, made of herbarium, “cinquecentine” (books printed in the XVI century) and miniature bibles, grew thanks to the addition of private collections as well as of collections of other orders, which had been abolished. The Biblioteche Civiche Riunite Ursino Recupero include three main rooms: the reading hall located in what used to be the monks’ museum; the round hall located where the small dining room used to be; and the Vaccarini hall, with the original frescoes and wooden shelves corresponding to the original library.

The monastery is almost neglected. What used to be the magnificent Benedectine monastery is substituted by schools symbolising a new state that tries to ‘make the Italians’.

In 1977, within a project of regeneration of the historical centre of the town, the Municipality donated the Monastery to the University of Catania that used it for the Faculty of Humanities. The architect Giancarlo De Carlo supervised the restoration works that brought to the recognition of the value of the monastery as an example of Contemporary Architecture (Opera di Architettura Contemporanea) from the Sicilian Regional Government. De Carlo described the project as “one that prefers to eliminate instead of adding, restore instead of substituting, put a ‘net’ among the various parts instead of redefining them” (our translation). Thanks to the long-sighted vision of the architect, of the then dean of the faculty and of the Technical Office of the University this cultural heritage example has been given back to the community. In 2002, UNESCO included the monastery, together with other sites representative of the late Baroque of South-Eastern Sicily, in the World Heritage List.

The restoration of the Monastery lasted thirty years and has led to the discovery of the history of the town from the Roman period to the present day. An entire Roman neighbourhood with the two main axes the Cardum and the Decumanus Maximus, houses of the late Hellenistic and imperial time has been found under the monastery. It is possible to see the remains in the main court and under what used to be the stables of the monastery (where now are the classrooms of the faculty). In particular, a domus (Roman house) with its peristilio (court) is still visible within the university library, perfectly integrated in the structure of the 16th century monastery and in the contemporary ‘hanging’ structures that allow students to access and use this space.

Using architect De Carlo words, today the monastery, “with its real structure, of a three-dimensional space, has character of a place where young people move from one point to the other: a place full of air, light, communication, expectations and promises. Through different readings of the place and tentative projects the old meanings have been substituted by a new one that allows the old architecture to get a new structure, and an important role for the contemporary world”. 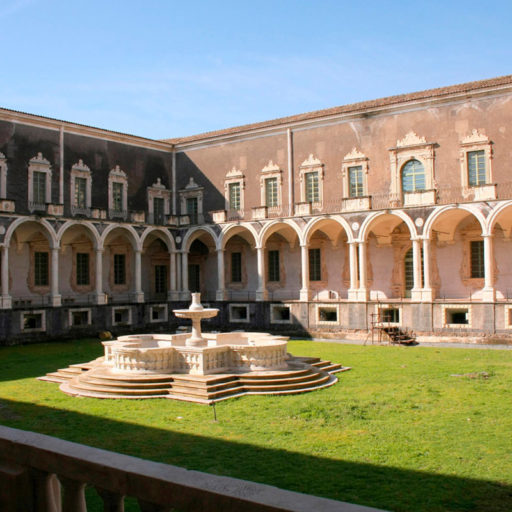 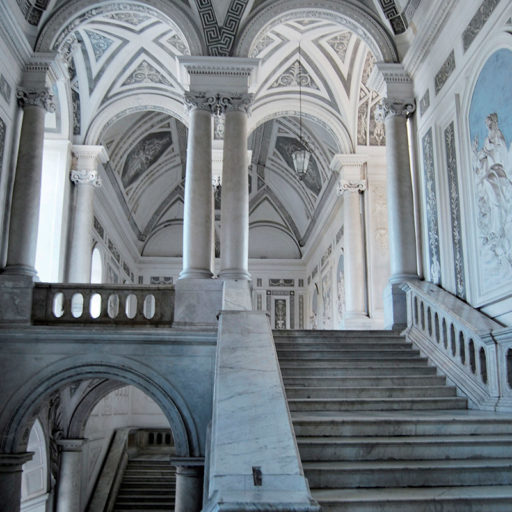 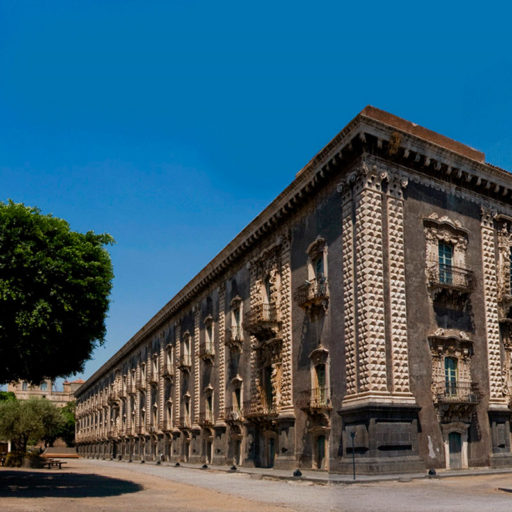 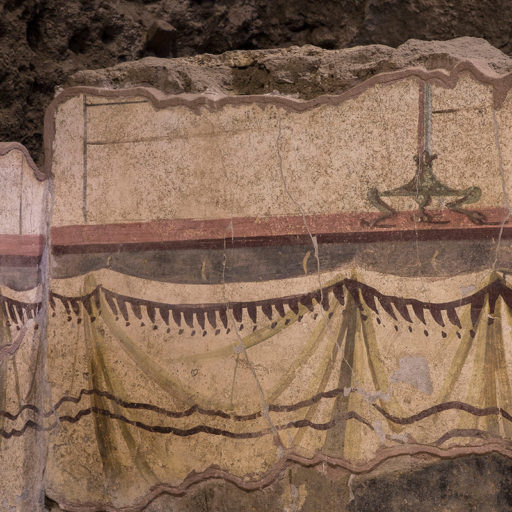